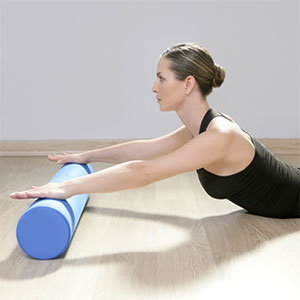 Over the past few years, the foam roller has become a popular tool to increase sporting performance and for muscle recovery after exercise. It is used as a type of self-myofascial release, or self massage. I have noticed that many people are even using the foam roller to replace the good old stretch. But is the foam roller alone actually that effective in decreasing delayed onset muscle soreness, or increasing athletic performance?

Up until now, the static stretch (holding a muscle on stretch for roughly 30 seconds) has been given the thumbs up for increasing flexibility of muscles, improving athletic performance and decreasing the risk of injury. Why? Because over time, consistent stretching routines will slowly lengthen out muscle fibers, and the response that tells you that you can’t stretch any further will become accustomed to the lengthened position, allowing you to stretch further without issue.

As it turns out, there isn’t an extensive amount of research out there on the effects of foam rolling, however a few key points have been made.

This article is for information purposes only. Please consult your Osteopath or primary healthcare professional for further information.

Dr Elise Fuller graduated from RMIT University with a Bachelor of Applied Science (Complimentary Medicine) and a Masters of Osteopathy. She is currently practicing in the eastern suburbs of Melbourne and in her spare time writes articles for her blog, inspired by her experience treating patients and from life in general!

Posted in Eastern Suburbs Osteopath, Stretches, Stretching
← The 3 most important factors in setting up your deskTips for sleeping easier with low back pain →